Looking for a delicious and hearty soup to warm you up this winter? Look no further than Panera Corn Chowder! This soup is packed with flavor and will leave you feeling satisfied. It's the perfect meal for a cold day.

Chowders were originally brought to North America from English and French seafarers, and it quickly became a favorite dish at Fourth of July celebrations.  It is a popular dish in New England particularly, known for the simple ingredients and the way it sticks to your ribs on a cool rainy day.  It’s different from regular soup because of its thick, creamy texture, usually achieved with cream or milk.

Sweet corn kernels Corn: One of the best things about this recipe is that you can use frozen corn, making this dish easy to throw together at any time of year. You can definitely use sweet summer corn sliced off the cob as well, just adjust the amount of vegetable broth you add.

Coconut Milk: This adds a creamy consistency to the chowder.

Parsley: Add a fresh taste to the dish

Cider vinegar: Cider vinegar is a traditional ingredient found in many types of chowder, and though it may seem like an odd addition, it brings just enough acidity to enhance the other flavors in the dish.

Red bell peppers: The red pepper adds a pop of color, you can also use poblano peppers for a more authentic taste.

Start by sautéing your veggies, adding the corn last.  You just want to soften them up a bit, not sear them. Simmer your ingredients together in the vegetable broth and coconut milk for fifteen minutes, or until your potatoes are tender.  I always adjust the seasoning at the end, because the potatoes tend to absorb a lot of the salt.

Served with rice or quinoa this dish is hearty and satisfying.  I’m confident that this dish will become a favorite of yours as well.

What is the difference between chowder and cream soup?

It is because chowder is practically one kind of soup. Basically, chowder is a thicker kind of soup as it is cream-based while soup, in general, is usually made much thinner and has broth

Can I make this soup in advance?

Yes, this soup can be made in advance. Allow the soup to cool completely then store in an airtight container in the fridge for up to four days. Reheat on the stove over low heat until warmed through before adding the

How do I store the Corn Chowder?

What can I serve with the Corn Chowder?

This soup is delicious on its own, but can also be served with a side of crusty bread try to find a panera bread like.

What is the taste and texture of the Panera Corn Chowder?

The corn chowder is creamy and thick with a slightly sweet taste from the corn. The texture is smooth with some chunks of potato and vegetables throughout.

-If you want a thinner soup, simply add more vegetable broth until desired consistency is reached.

-For a spicier soup, add a pinch of cayenne pepper or chili powder.

-Add some shredded cheese on top of each bowl for an extra cheesy flavor.

-Top each bowl of the Panera Corn Chowder with some chopped green onions or chives.

-Serve the corn chowder with a side of crusty bread or a simple side salad.

-If you want a heartier soup, add some cooked chicken or bacon.

-Add a can of drained and rinsed black beans for an extra boost of protein.

-Swap out the red pepper for green pepper, or use a combination of both.

-Add a tablespoon of honey for a slightly sweet flavor. 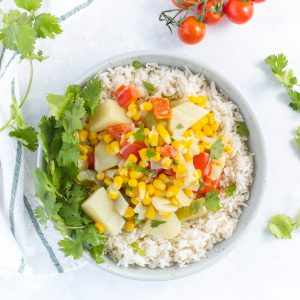 You can keep the corn chowder in the fridge in an airtight container up to 5 days, do not freeze.

Hi, I'm Sophie! Passionate about cooking, I love to create recipes with simple and affordable ingredients. No prerequisite in cooking is necessary to make my recipes, everyone will find pleasure in cooking and eating!